The Historical Society of The Nyacks and the Friends of the Nyacks announce the schedule for the 2013 fall season of the John Scott Armchair Walking Tours. This popular program, now in its eighteenth year, features slide presentations on local history, architecture and related cultural subjects. The Armchair Walking Tours are dedicated to the memory of John Scott, Rockland County’s great historian. The programs are produced by Bob Goldberg. 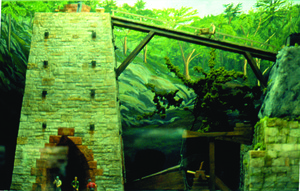 The opening program in September, “The Ramapos and the Iron Industry, When Sterling Forest Was The Iron-Making Capital Of New York”, will be presented by Donald “Doc” Bayne, historian, photographer and retired environmental educator and forest ranger at Sterling Forest.

During colonial times rich deposits of iron ore were discovered in the Ramapo mountains, and these deposits gave rise to a major industry. The great chains, which were placed across the Hudson River during the Revolutionary War, to prevent the passage of British warships, were manufactured at Sterling Forest.The program will describe the discovery of the iron ore and the growth of this very important local industry.

The program will be presented first in the Nyack Library, 59 S. Broadway, at 7:00 PM Wednesday evening, September 18 and will be repeated the following afternoon, Thursday, September 19 at 2:00 PM in the Valley Cottage Library on Route 303.

Camp Shanks, First Stop on the Road to Victory In Europe
The October and second program in the series will be presented by Jerry Donnellan, a native of Nyack and a wounded Vietnam War Veteran, currently Rockland County Commissioner of Veterans Affairs and Curator at the Camp Shanks Museum in Orangeburg.

In September of 1942, the U.S. Army took over 2,000 acres of Orangeburg farm land and New York State property to create a huge Port of Embarkation to support the war in Europe. Over 1.3 million GIs were processed at this “last stop USA,” on their way to Victory in Europe. After the war, Camp Shanks served to process the returning and victorious men on their way home. Many veterans chose to remain in the area at Shanks Village, with their wives and children, to study at near-by colleges and universities. Many of these veterans, with their new degrees and families, decided to remain in Rockland and built the Hickory Hill Cooperative in Tappan.

The program will presented first at the Nyack Library, 59 S. Broadway, at 7:00 PM on Wednesday evening, October 16 and will be repeated the following afternoon, Thursday, October 17 at 2:00 PM at the Valley Cottage Library on Route 303.

Trap Rock Quarries In Rockland – Digging Into Our Earliest History
The November program will be presented by Bert Dahm, a life long resident of West Nyack, president of Heritage of West Nyack, and unofficial historian of that hamlet. Bert Dahm’s family owned and operated three Trap Rock quarries that later merged to form the New York Trap Rock Corporation.

The program will describe Rockland’s earliest industry including the uses of trap rock and the hazardous explosives which were used to mine this valuable mineral. Bert will show the growth of this basic industry and include many events from his personal recollections of his family’s role in the quarries of Rockland.

The program will be presented first in the Nyack Library, 59 S. Broadway, at 7:00 PM on Wednesday evening, November 13 and will be repeated the following afternoon, Thursday, November 14 at 2:00 PM at the Valley Cottage Library on Route 303.