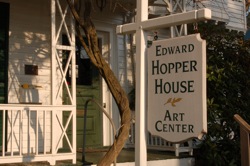 Continues through August 16, 2015 in the Main Gallery

John F. Simon, Jr. (b. 1963) is known for his software-based installations and projections, often using computers to activate ideas from the history of painting. For this exhibition, Simon created a site-specific, freestanding sculptural work that is inspired by Edward Hopper’s paintings of urban exteriors. Simon is particularly interested in the way Hopper juxtaposes various styles of New York City architecture in his paintings. Simon shares Hopper’s fascination with ornate cornices, brick and plaster finishes, window frames that vary from building to building, and the extremes of color, light, and shadow that play across their surfaces.

Using pencil sketching, 3D modeling, and CNC milling, Simon takes advantage of the latest digital fabrication techniques to exaggerate perspective and simulate shadow, building and mixing several facade styles in alternating patterns. He will also show several of his earlier software “art appliances,” the imagery and style of which relate to his love of the architectural styles of New York City. Among the works shown will be: ComplexCity (2000), Window (2001) and Endless Bounty (2005)–all works of software art that explore the themes of city life, color and light.

Behind Doors and Through Windows: Reflections on Contemporary Domestic Life

Edward Hopper House presents a group exhibition featuring 16 artists who challenge traditional notions of home and domestic life. In the 19th Century, many artists produced sentimental visions of life and the idyllic family. By contrast, the artists in this exhibition employ a variety of techniques and mediums to reveal the complexity of everyday life. Reexamining the idealized social and familial expectations of family and home, they choose to highlight the layered meanings of relationship tensions, roles, rituals, and personal and cultural traditions.

Sculpture in the Garden 2015

Ongoing in the Sanborn Gallery and Hopper Bedroom

Early drawings, paintings, and etchings, together with memorabilia, including model boats made by Hopper, paint boxes, and an easel, are presented on an ongoing basis. 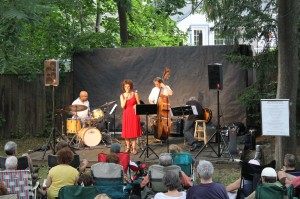 The 35th year of summer jazz concerts at the Edward Hopper House, featuring:

Aug. 13- Ben Kono Group (made by possible by a grant from Chamber Music America)

From the design of his unique software art to the compute-fabricated aspects of his 3-D work, exhibiting artist John F. Simon, Jr. will discuss his process and vision and help you to ee these complex creations in a new way.

Consisting mainly of 17th century art from Holland and the low countries, Mr. Way’s collection would likely make Edward Hopper and his Dutch forebears proud. Way, who lives on Staten Island, has been a collector since the age of 15. From a novice, to a collector, to a connoisseur, his collection has grown to become the most definitive private collection of 17th century Dutch art and artifacts in the United States.

Highlights from his collection are currently on view through November 15, 2015 in the exhibition “From Holland to Here” at the Orangetown Historical Museum & Archives in Orangeburg, New York.

October 24, 2015 – January 3, 2016
SUBMISSION DEADLINE: September 1, 2015
JUROR: Lisa Panzera, Senior Director of Fergus McCaffrey, New York
Edward Hopper House Art Center welcomes applicants to its 22nd annual Small Matters of Great Importance juried exhibition, held in two gallery rooms of Edward Hopper’s birthplace and childhood home, now a non-profit art center and museum. The exhibition celebrates small works that make big statements despite their size.
Theme: In keeping with Edward Hopper-related themes, this year all submissions should focus on Light & Shadow. Light was an important expressive tool for Edward Hopper. As he said, “What I wanted to do was paint light on the side of a house.” We invite artists to submit work that features light and/or shadow as a key element. For information and to enter, go to: http://www.edwardhopperhouse.org/smgi-2015.