On select Friday nights from September through May, the Nyack Library is filled with the sound of music. Since 2008, the Carnegie Concert Series has presented a talented and diverse roster of musicians in the intimate Carnegie-Farian room — the original wing of the Nyack Library, built in 1903. The Nyack Library isn’t just any library, it is a Carnegie Library, one of 1,689 libraries built with funding from Andrew Carnegie in communities throughout the United States. (Read more about the history of our beloved library here and here.) According to Vanity Fair magazine, “One of the most enjoyable concert series in New York is actually 33 miles north of the city, in the charming Hudson River village of Nyack. There the Carnegie Room Concerts presents major artists in the warm, intimate, relaxed setting of the historic Nyack Library.”

The Nyack Library has announced the schedule of performances for the Carnegie Concert Series 2017 – 2018 Season. Reservations may be made at www.nyacklibrary.org/calendar. 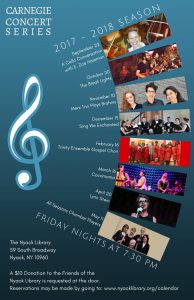 All Seasons Chamber Players
May 11