Harry Chapin: When in Doubt Film 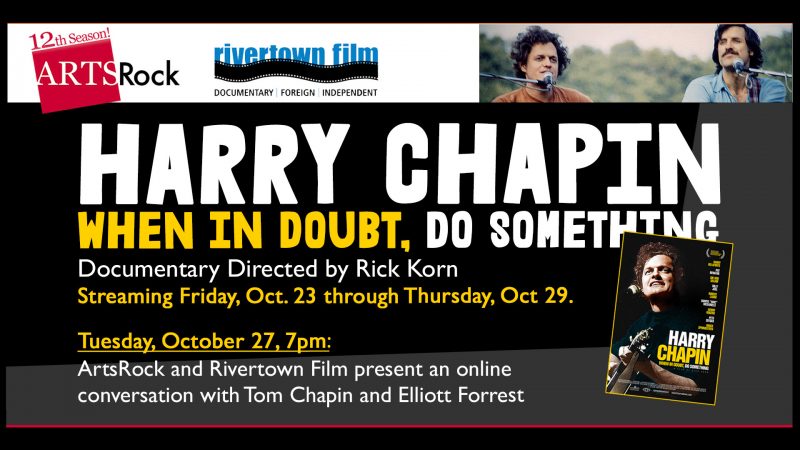 ArtsRock and Rivertown Film present
Harry Chapin: When In Doubt, Do Something

Tom Chapin is a musician, entertainer, singer-songwriter, storyteller, and the younger brother of Harry Chapin. From 1971 to 1976, Chapin hosted Make a Wish, a Sunday-morning children’s TV series. Chapin takes part in the storytelling festival circuit and has been a Featured New Voices Teller at the National Storytelling Festival in Jonesborough, Tennessee. He has won Grammy Awards for three Best Spoken Word albums. He often appears at tribute concerts for his brother, along with many other members of his musical family.

The Holiday Season has arrived, and Hickory Dickory Dock is providing several ways to shop to ensure that your visit is as safe and convenient as possible. Open House Hours We will continue to have open house hours for in-person browsing in our shop Wednesday through Friday, from 12pm to 5pm, and Saturday and Sunday from 10am – 5pm. During this…

Nyack’s Winter Wanderland showcases the best of what Nyack has to offer every Saturday and Sunday starting November 28, 2020 and running through February 28, 2021. Residents and visitors are invited to “wander” through our wonderful village to enjoy seasonal delights, such as sidewalk shopping and winter markets, hearty food and hot drinks, festive lights, the warmth of fire pits, and the joy of…