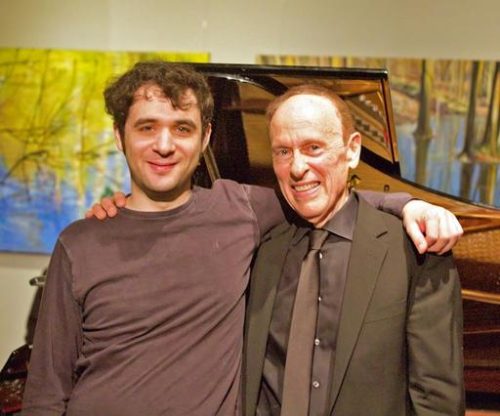 Roost Restaurant is happy to invite you to our new monthly event : the Jazzounge at Union Arts Center! Presented by Mz. Valentine, November’s Jazzlounge will showcase Joel Zelnik and Albert Ahlf: From Z to A Double Jazz Piano Concert. That’s right, TWO PIANOS!

We have two dinner seatings upstairs with the concert:

Please arrive promptly. Seating is first come first served. Roost will be offering a delicious seasonal menu with the concert ($25 minimum per person at tables)

We recommend purchasing tickets at least 48 hours in advance.

For those who do not wish to dine, a limited number of tickets will be sold at the door payable by cash or Venmo only. A table is not guaranteed with these tickets.

Entrance to the concert is through the door on the LEFT

NOTE: Concerts take place on the second floor. Roost and Union Arts Center are located in a one-hundred-year-old restored firehouse without an elevator.

album, “MOVE”, which was reissued in Japan. A contemporary of Bill Evans, Joel hasentertained 5 presidents, has been a pianist/bandleader for thousands of events for such dance orchestras including Lester Lanin, Bob Hardwick, Alex Donner, Cabot/Scott, and his own company Francine and Joel Music. He has performed at concert venues in New York, AtlanticCity, Las Vegas, Japan and Greece. NYC legendary venues include: Windows On The World and The Rainbow Room. He has recorded two CD’s and also holds a B.A. from New Jersey CityUniversity, and an M.A. from Rutgers University. His latest recording, “Live At SteinwayPiano Gallery” was performed on a Steinway Model D Concert Grand, and released in Japan.The Joel Zelnik Trio appears regularly at Concert venues, Jazz Clubs, Libraries and more, withaudience engaging programs dedicated to New Jersey’s musical treasure: 7 time Grammy Award Winner Plainfield born Bill Evans.

ALBERT AHLF is a New York based virtuoso pianist, vocalist, arranger, jazz historian, and music teacher. His accolades include being the sole jazz pianist for NYSSMA in 2011, being offered a position with the Glenn Miller Band, and performance venues include Dizzy’s Club, The Blue Note Jazz Club, Norwegian Cruse Lines, and more. Albert received his B.M. [Jazz Performance] from SUNY Purchase and M.A. [Music Education] from Hunter College. Past collaborators include Jon Faddis, Kenny Washington, Andy Laverne, and Charles Blenzig. In 2021, Albert released a solo piano single entitled “Black, Brown and Beige”, based on material by Duke Ellington. This work earned Albert a writeup/review in NYCs famous “Hot House” jazz magazine, as well as the “Jersey Jazz”. While in grad school, Albert formed a swing jazz trio which then later turned into an 8 piece swing band with three singers entitled “The Ahlfabet Swing Group”.

Today, Albert continues to perform, educate, record and arrange music within the styles of Swing, Jazz, Blues, Gospel, and occasionally Classical. His music/performances can be listened to and viewed on SoundCloud, YouTube, and streaming platforms such as Spotify.