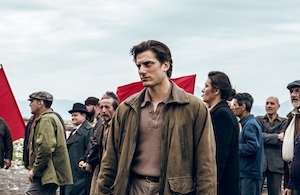 Martin Eden is a sprawling, enthralling, narrative that sweeps though Italy in the 20th Century. Martin is a self-taught proletarian with artistic aspirations who hopes that his dreams of becoming a writer will help him rise above his station and marry a wealthy young university student (Jessica Cressy). The dissatisfactions of working-class toil and bourgeois success lead to political awakening and destructive anxiety as the story follows Martin’s psychological and moral growth from youth to adulthood. Adapted from a 1909 novel by Jack London. 2019, Italy, 129 minutes, in Italian with English subtitles.

“A movie that arrives like a bolt out of the blue, bursting with ideas, not unlike its hero.”
– J. Hoberman, The New York Review of Books

“Vibrant and passionate. A dazzling showcase for Luca Marinelli. It’s as if the whole 20th century had been distilled, or scrambled, into an eternal, mercurial now.” – Justin Chang, Los Angeles Times

“Old-school cinematic soul food – a sweepingly stylish and smart Italian coming-of-age drama that feels as if it could have been made 60 years ago, during the heyday of Visconti.” – Ty Burr, Boston Globe

“A masterpiece… see it any way you can.” – Bilge Ebiri, Vulture

“Everything I love in movies. An absolute blast.” – A.O. Scott, The New York Times.

“One of the most epic-feeling Italian movies in years, a throwback to ’70s-era big-canvas statements. Lead actor Luca Marinelli, rousing in every scene, comes within hailing distance of the young Robert De Niro.” – Joshua Rothkopf, Time Out New York

“A spectacular performance. Marinelli is a force of nature in every scene and doesn’t play Eden so much as inhabit him.”
– Boyd van Hoeij, The Hollywood Reporter

“This could be the international break-out of the season.” – Jordan Raup, The Film Stage

The Holiday Season has arrived, and Hickory Dickory Dock is providing several ways to shop to ensure that your visit is as safe and convenient as possible. Open House Hours We will continue to have open house hours for in-person browsing in our shop Wednesday through Friday, from 12pm to 5pm, and Saturday and Sunday from 10am – 5pm. During this…

Nyack’s Winter Wanderland showcases the best of what Nyack has to offer every Saturday and Sunday starting November 28, 2020 and running through February 28, 2021. Residents and visitors are invited to “wander” through our wonderful village to enjoy seasonal delights, such as sidewalk shopping and winter markets, hearty food and hot drinks, festive lights, the warmth of fire pits, and the joy of…