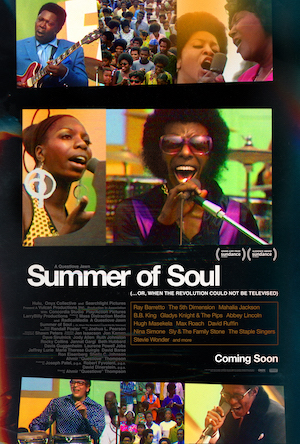 Summer of Soul (… Or, When The Revolution Could Not Be Televised) is a feature documentary about the 1969 Harlem Cultural Festival, directed by Ahmir “Questlove” Thompson, drummer for The Roots and bandleader for The Tonight Show Starring Jimmy Fallon. USA, 2021, 118 minutes, documentary.

This film marks Thompson’s feature directorial debut and focuses on the outdoor festival in Harlem’s Mount Morris Park that took place the same summer as the famed Woodstock festival and boasted an attendance on par with that concert 100 miles away. It featured dozens of extraordinary performances by artists including Stevie Wonder, Sly and the Family Stone, Nina Simone, B.B. King, the Staple Singers, the 5th Dimension, David Ruffin, Mahalia Jackson and Gladys Knight and the Pips. Over 300,000 people attended, yet it received virtually no coverage from the mainstream media. The 40 hours of never-seen-before footage was originally shot by the late television pioneer Hal Tulchin, but has largely remained in storage for the past 50 years, keeping this incredible event in America’s history lost – until last year.

“Watching Summer of Soul, what you experience is nothing less than the sound of freedom.” – Variety

“Best Film of the Year” – The New York Times

“Summer of Soul is both a tribute to the artists and, just as importantly, their audience — which is what makes it not just a great concert film but a great documentary, period.” – Rolling Stone

“Some of the performances are breathtaking, and all of them are valuable, like the political and social context that surrounds them.” – Wall Street Journal

Brunch•ish & Beats at The Greek•ish
Phoenix Festival: The Importance of Being Earnest
Night & Day: Love Lost and Found Through the Eyes of Cole Porter
Author Talk: The Desecrated by John Gray
Nyack Farmers Market