This article originally appeared on NyackNewsAndViews.com on September 3, 2013. It is re-posted here with permission.

Pierre Bernard, America’s first yogi, lived on an ashram he called the Clarkstown Country Club in Nyack from 1920 until his death in 1955. The complex of buildings is now the campus of Nyack College. Equal parts Harry Houdini and Howard Hughes, Bernard achieved degrees of success as a yogi, animal trainer, baseball manager, and aviation expert. But millions knew him by his dubious tabloid title, Oom the Omnipotent. 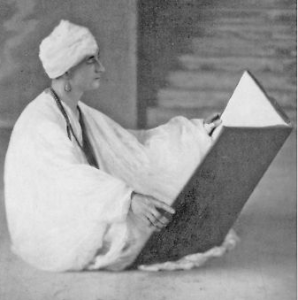 A midwesterner with a flair for marketing and business savvy, Bernard was the nation’s first spokesperson for yoga, a practice first mentioned in the Hindu Vedas written 3,500 years ago. As his teaching captured the imagination of enlightened European and American elites, he became a victim of his own success. The newspapers of the Hearst organization, fueling a xenophobic reaction to a wave of immigration, led a campaign to destroy Bernard’s reputation.

Despite a sensationalized trial that reeked of prosecutorial misconduct and well-funded private investigations and smear campaigns, Bernard never relented. He continued to promote and teach a regime of physical and mental conditioning that consisted of a set of specific postures, deep breathing techniques and meditation. Over time, his position prevailed. Hearst headlines went from describing his practice of yoga as an attempt to seduce “Young Girls with Hypnotic Powers” in 1910 to “Helpful to Mental, Physical Powers” in 1935.

The man the nation came to know as Oom was born Perry Arnold Baker in 1876 in Leon, Iowa. In 1889, Baker moved to Lincoln, Nebraska next door to a Syrian Indian named Sylvais Hamati. Hamati taught Baker the physical and spiritual practice of yoga and it was said the student kept a picture of his teacher near him for the rest of his life. 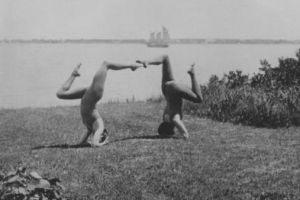 Bernard parlayed the teachings of his guru into an empire of schools, clubs and publications that would make him millions of dollars and introduce America to yoga. But controversy accompanied each step of his steep ascent.

Most of the complaints from the public against Bernard reflected the anxiety Protestant America felt when confronted with the odd and revealing exercise costumes his students wore, and with co-ed classes, ethnic music and chanting that were a part of yoga. There were also constant rumors of orgies. Governments and religious institutions of the period were either hostile or suspicious of the foreign origins of his eastern philosophy. He was literally driven from San Francisco, Seattle and New York City by overzealous moralists using the media and public prosecutors’ offices to protect conservative western values from the threat of the popular alternative teaching. 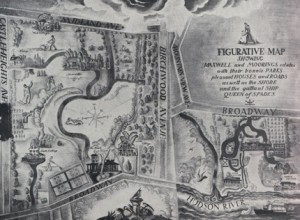 With two streams of attention converging around Bernard — muckraking journalists and affluent truth seekers — The Omnipotent Oom arrived in Nyack. The sustained harassment after his 1910 trial made Manhattan unbearable and the patronage of Anne Vanderbilt allowed him to obtain the lease for an estate in Nyack. The Hudson Valley village offered a secluded destination that was still accessible by car, train and ferry.

Even though he was welcomed to Nyack by a state police raid shortly after his arrival, eventually, Bernard became a prominent citizen and a successful, albeit eclectic, entrepreneur.

Nyack resident and star of stage and screen Helen Hayes MacArthur recalled “During World War II we had a number of war relief benefits together, shows and sports events that scrambled local talent, Broadway greats into a tasty dish.”

Despite the substance of his economic, civic and philanthropic activity, the gossip pages never left Bernard alone. But the target of the negative press coverage was learning the irony of infamy in America. “Everytime they rehash the old junk about the club, its membership increases from one to two dozen members,” Bernard observed.

Pierre Bernard left his estate to his wife and business partner Blanche DeVries when he died in 1955. DeVries, who taught side by side with her husband for decades, left Nyack after his death to open a successful yoga studio in New York City. DeVries taught into her nineties and is considered by some the First Lady of American Yoga.

One of DeVries’ students, Paula Heitzner, still teaches in Nyack. Heitzner says the Nyack Yoga Center is the longest running yoga studio in Nyack, operating for over 35 years at the corner of Main St. and Broadway. Her success would have pleased DeVries and Bernard. According to their biographer Robert Love, author of The Great Oom, “the real business was training the next generation of teachers.”

In 1956, DeVries sold 19 acres to what was then called the Missionary Training Institute and is now Nyack College. The parcel, that fetched $250,0000, included a theater, assembly room, music room, bell tower, garages and the building in this week’s sketch, the clubhouse, where Bernard spent his last days. The structure is now a mens dorm called Moseley Hall.

In a final gesture, that united his belief in physical fitness and his fondness for his home of 27 years, Bernard bequeathed the lights that illuminated the night games at his Clarkstown Country Club to the old Nyack High School sports field.

With dozens of buildings that housed his classes and followers still standing, his stadium lighting piercing the night sky and a veritable yoga district stretching across downtown, Oom survives: not omnipotent, but in Nyack, through the limbs of his legacy, omnipresent.

Special thanks to Win and Betty Perry of the Historical Society of the Nyacks. The Historical Society has published a facsimile of the original 1935 publication of Life at the Clarkstown Country Club. Copies are available at the society’s museum in the Depew House behind the Nyack Library.

Robert Love’s biography of Pierre Bernard, The Great Oom, is a masterful portrait of the man and his times. Copies are available at Pickwick Book Shop.

Map photo: this mural, once located in the main club house lounge of the Clarkstown Country Club, was painted by Olle Nordmark via omnipotentoom.com 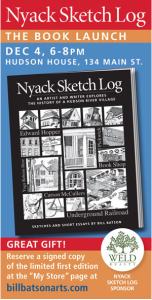 Bill Batson’s compilation of Nyack Sketch Log columns will be available for purchase from December 4, 2014. Order your copy today.