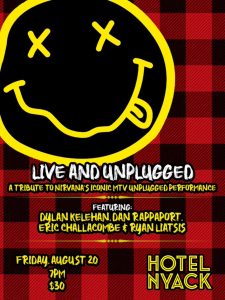 Live and Unplugged - A tribute to Nirvana's Iconic MTV unplugged performance. The band will recreate the album that defined a generation in its entirety. Additionally we will be performing another set of all 90's era MTV unplugged performances. Including: Goo Goo Dolls, Pearl Jam, R.E.M, Alice in Chains, STP and more! Dylan Kay - Vocals, Guitar Dan Rappaport -… 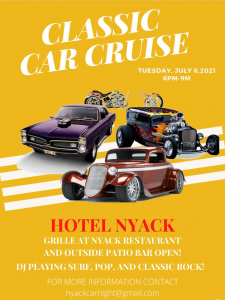 Postponed due to weather, this event has been rescheduled from July 6 to August 3. Join Hotel Nyack for for Classic Car Cruise at The Grille at Nyack's outside patio bar! We’ll have a DJ spinning classic rock, pop, and surf music from 6pm-9pm. 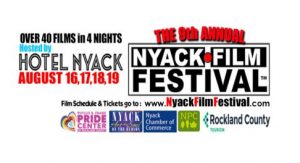 The Hotel Nyack will host the 9th Annual Nyack Film Festival, August 16-19, 2021. This 4 night celebration of the art of cinema has become a popular highlight of summer in this Hudson River Village, a short distance from New York City. Held the 3rd week of August, Nyack Film Festival attracts film enthusiasts, actors, musicians, media and industry to a…

MORE »
Elmwood Playhouse is Back with Fall Productions