This weekend, there’s no business like show business! Elmwood Playhouse stages A Time To Kill, Antrim Playhouse puts on The Man Who Came To Dinner and Nyack High School presents Dirty Rotten Scoundrels. On the big screen, JCC Rockland hosts the Reel Abilities Film Festival while Nyack Village Theatre shows State of Grace. To recognize Nyack’s brightest, the Nyack Center throws a Women of Vision and Leadership Brunch. Here’s your Fri-Sun list of what to do and where to do it, brought to you by The Arts Council of Rockland and the Union Arts Center. 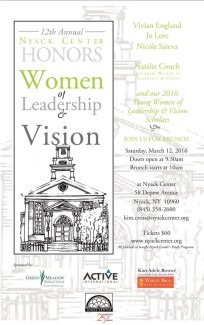 The Book And Pub Club, a book club geared toward 21 to 30-somethings, meets up to discuss Speak by Louisa Hall. 7p at Olive’s, 118 Main St, Nyack .

The Nyack Weekender is published every Friday in collaboration with Nyack News & Views — Nyack’s #1 source for local news and information.