Nyack, New York – In welcoming 60-plus guests to the opening of “Where We Are Standing: Contemporary Women Artists from Iran” on Friday evening, the Hopper House’s Executive Director, Victoria Hertz, paraphrased Edward Hopper: “Edward Hopper said what you once were you always are.” The quote – in full: “In every artist’s development the germ of the later work is always found in the earlier…What he was once, he always is…” – has been something of a mantra for the Hopper House of late. It’s featured on the homepage of the Hopper House’s website. And exhibit curator (and Hopper House Artistic Director) Carole Perry relayed the quote to me hours earlier during a pre-screening. Hertz continued, “If this work isn’t an example of that, I don’t know what is.”

The work was created by three respective Iranian women, Golnar Adili, Roya Farassat, and Shabnam K. Ghazi, within the last decade, while the women were living (at least part time) in North American cities (Adili and Farassat in New York, Ghazi in Toronto). The three artists’ works, each given a wall-plus of the small gallery, were made from different mediums and explore different personal issues and interests, but together cohere and tell a story of what it means to be an Iranian woman born two to 14 years before the 1978 Iranian Revolution.

Farassat, the oldest of the three women, migrated from Tehran to New Jersey when she was 14-years-old. She became aware of the Hopper House, and eventually submitted her art to the gallery, because a friend of hers had had her work shown there previously. “Where We Are Standing” features 24 paintings that Farassat created between 2009 and 2013, many of which depict darkly abstracted women, veiled or suffering, though often in a subtly satirical way. In Farassat’s “Trophy Wife,” for instance, a cartoonish Iranian woman – all eyes and veil – is held in a man’s hand, a jab at both cultures’ ideas of the role women should play. Compared to the other two artists, Farassat’s work most blatantly contends with Iran and Middle Eastern femininity.

But making art that contends with her childhood home is fairly new for Farassat. A lifetime artist, Farassat did not begin grappling with her childhood home through art until 2009, when she became acquainted with several Iranian artists. “It made me think about how I’m going to reconnect back to my culture,” Farassat said. “My memory is sort of frozen in time, up to age 14 – sort of the way women were being treated and are still being treated. I talk about a lot of that veiling and unveiling, though I actually never wore the veil over there. Part of the work is about covering up. The veil becomes this wall between the outside and the inside, your personal identity and what’s happening on the outside. And sometimes you see the woman sort of becomes like an ornament, and becomes part of the outside. So it becomes one. Except when the eye is looking out and the eye becomes like an eye that is aware of what’s going on. It changes.”

If Farassat was looking at Iran from the outside in, Golnar Adili and Shabnam Ghazi, each of whom spent more of their formative years in Iran, were looking at Iran more from the inside out. Their work is deconstructed and distorted, fragmented and repeated.

Adili especially. Her eight works on display were grand collages. She took apart multiple photos (or other objects) and rearranged their pieces – into the female chest; an eye over a palace; a letter; and an inverted airplane window. All featured muted metallic colors, and were expressions of separation and longing.

Adili’s feelings of remoteness have roots in the Iranian Revolution, and specifically its effect on her family. She was born in the United States but was brought back to Iran (her family’s homeland) when she was four. She grew up bouncing from one parent to another because her father*, in her words, “had to escape [Iran] because he was a leftist activist, and they were really – the Revolution became extreme after Iraq invaded Iran.”

The inverted airplane window, “12 Seconds of Time,” reflects the two sides of air travel: A flight can be exhilarating on the one hand, and frightening and peculiar on the other hand. The sky in the top half of the collage (which would be the bottom half of the window) is a clear blue; the bottom is dark, almost galactic. Adili achieved this effect by cutting and rearranging four photos that she took at three-second intervals during a Luftansa flight from Tehran to Frankfurt. “I mixed them in a regular grid, so one-two, one-two, one-two, three-four, three-four, three four. But I extracted it further by cutting it in the middle and converting it. So basically it’s an explosion of time.”

Shabnam Ghazi, though, even more deliberately played with time in her work, appropriately titled, “The Astonishing Story of Us in a Scarcity of Time.” The work is a five-minute film that plays on loop, and is projected onto the ground. But the film isn’t a film in the traditional sense. It more closely resembles the opening credits of Mad Men. Black silhouettes stroll through a white backdrop. The view is from above; and the silhouettes are not just of humans, they are of ants.

“The movie is all about time, and the scarcity of time. So everything is rushed and we don’t have time for anything,” Ghazi said. Her inspiration came riding the subway each day to her studio. “I would look at people. We were like all of us in the train or in the subway, but we were not connected. We were in our little bubbles. So it was like very scary for me. Because you feel that you are connected but at the same time you are disconnected.”

The film, which was shot from atop tall buildings in Toronto and Tehran, anonymizes and equalizes. Whether woman or man, Iranian or Canadian, from above we’re all just blips, or, well, ants. Patrons are allowed, even encouraged, to step on the projection.

Accompanying Ghazi’s film is a wall full of tiny, framed still shots from the film, creating an infestation of sorts. Perhaps not so ironically, Ghazi planned to paint these still-shots, but then realized that there wasn’t time. The final product wound up taking just as long to construct as it would have to paint the pieces. But like the rest of the exhibit, Ghazi’s work is arranged intuitively and strikingly.

“I think that this is without question the best exhibition in the Hopper House in the 20 years that I’ve been living here,” said Nyack resident and acclaimed Edgar Degas scholar, Richard Kendall. “And it’s partly because it’s very professionally curated. Beautifully installed. Most important of all, the artists in question are really interesting and unusual, and saying things that you don’t normally get from an exhibition. They’re taking on a very tough subject. There’s women coming from a repressive country. And they’re making art from it, which isn’t kind of angry and crazy. Rather, in very subtle ways they make statements about being faceless and being other-categorized and that type of thing. So I think it’s terrific.”

Though “Where We Are Standing” came about quite fortuitously – Farassat and Adili applied; the Hopper House had worked with Ghazi in the past – Artistic Director Carole Perry said that she hopes for the gallery to continue to get newer and more diverse in its future exhibits. “A lot of times we do like to be Hopper related. But we also want to reach a larger audience.” In other words, like an artist, what a gallery once was, it always is; and because of new experiences, what it is is constantly changing.

Read more about the exhibition in the New York Times: http://www.nytimes.com/2016/03/20/nyregion/threeiranian-women-use-art-to-pierce-their-homelands-veil.html?_r=0 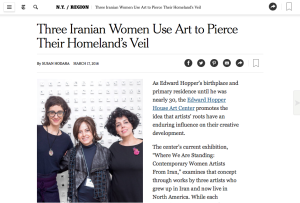