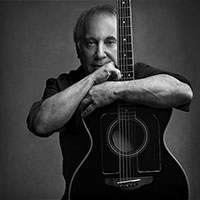 Friday, October 24, 2014 at 8:00pm, as part of ArtsRock ‘Guitar Magic’ series brought to Rockland County by Jeff Doctorow Curator and Host, Vicki Genfan and Todd Nelson, you will be brought back in time with the music from a 12 Grammy award-winning musician and singer-songwriter — Paul Simon. Simon expressed love, family, social commentary, religion, and spirituality in his music and still today evokes feelings in all of us. The Guitar Magic Series Celebration of Paul Simon is part of the Carnegie Concerts Series at the Nyack Library in the Carnegie-Farian Room.

Winning the esteemed Guitar Player Magazine’s ‘Guitar Superstar’ award in 2008, Vicki plays her own percussive technique of ‘slap-tap’ acoustic guitar, and has been showcased as one of the world’s top guitarists at festivals such as The International Montreal Jazz Festival, Germany’s Open Strings Guitar Festival, Italy’s Soave Guitar Festival and hundreds of venues and Performing Arts Centers across the US and abroad.

In addition to being a dazzling instrumentalist, Vicki is an award-winning singer/songwriter with a high-energy stage presence. Drawing from folk, jazz, pop, soul and world music, whether covering the tunes of others or presenting her own compositions, Vicki’s distinctive style pushes the boundaries of the singer/songwriter genre into new territories. While hopping between continents for performances, master classes and clinics, Vicki loves teaching and has four Instructional DVDs to her credit and is in high demand at clinics and music camps all over the world. She has two CDs released on Germanys ‘Acoustic Music Records’ and two Self-released CDs

Nelson is a guitarist who has recorded or performed with Terry Adams (NRBQ), Gary Burke (Dylan Joe Jackson), Hayseed, Aimee Mann, Ed Mann (Frank Zappa), Rumdummies, Pal Shazar, Jules Shear, The Wheelers and Dealers and others. He was a founding member of Fear of Strangers (aka The Units), a band that was an integral part of the Punk/New Wave scene in the Capital District of New York in the 1980s, releasing an album on Miles Copeland’s Faulty Products label. The band shared stages with the Police, Squeeze, the B-52s, XTC, Iggy Pop and others around the Northeast.

Todd is currently recording and performing original songs and arrangements for his jazz instrumental trio, featuring Kyle Esposito on fretless bass and Manuel Quintana on drums and percussion, both of whom are featured on his first CD release, “Here”.

This series, curated and hosted by Jeff Doctorow, offers a unique opportunity to hear incredible renditions and interpretations of the most popular guitar centric Rock and Roll. As a guitarist, Jeff has played at many area venues including The Turning Point, Mexicali Live, CBGBs and Rockwood Music Hall, and is considered a local guitar hero.

ArtsRock – The mission of ArtsRock is to provide increased access to professional arts and multi-cultural programs for an underserved, diverse audience, in and around Rockland County.ArtsRock is a 501 (C)(3) New York Not For-Profit Corporation.