The Edward Hopper House has restaged Edward Hopper’s bedroom, on view from October 2, 2016, to May 31, 2017. The bedroom in the historic house in which Hopper spent the first 28 years of his life has been transformed into a showcase designed in period style by Architectural Digest featured designer Ernest de la Torre, and architect Walter Cain. The staging of Hopper’s bedroom is a fitting acknowledgement of the profound impact

The staging of Hopper’s bedroom is a fitting acknowledgement of the profound impact the space had on his artistic development. Growing up with a view of the Hudson River from his bedroom window, young Edward was drawn to its banks. He would spend hours at the village docks and shipyards, sketching and watching the building and rigging of boats. The activity on the river is captured in many of Hopper’s early drawings and paintings, and boats and seascapes remained common subjects in his art throughout his life.

Also central to his artistic development was the so-called “Hudson River light” of Nyack. The strong rays of morning sunlight streaming through the east facing windows of his bedroom create shifting patterns of light and shadow on the floor. Hopper incorporated these tangible blocks of sunlight into many of his early paintings and later iconic masterpieces. Visitors to this showcase will be able to appreciate all the unique features of the bedroom that so inspired Edward Hopper and led him on his creative path.

Due to the historic nature of the house and other limitations, the second-floor room is only accessible by stairs.

The Art Center is also offering Hopper fans a special opportunity to spend a night in the reimagined bedroom through an online and live auction. Details available at http://www.edwardhopperhouse.org/hoppers-bedroom.html. 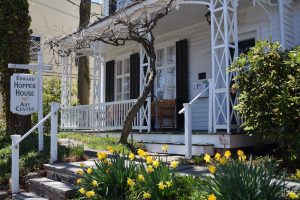 Gallery Hours:
Wed.-Sun., 12-5 PM or by appointment
Open until 8 PM on the first Friday of each month.
Public tours Saturdays at 1 PM.