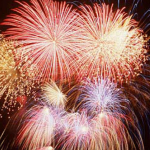 Come to Nyack on July 4th to see dueling fireworks displays fill the sky over the Hudson River. The Village of Nyack on the west bank and the Village of Tarrytown on the east side will both start their respective fireworks shows just before 9pm on the 4th of July.

The Nyack display, which will be launched from Memorial Park on the Hudson River, can be seen from any place in the Village where there is a clear view of the southeast sky. 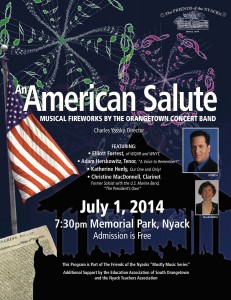 The Village’s celebration of USA’s birthday starts at 7:30pm on Tuesday, July 1 with “An American Salute: Musical Fireworks,” a free concert featuring the Orangetown Concert Band conducted by Charles Yassky in Nyack’s Memorial Park. Come hear a program of Sousa marches, selections from the American Songbook, Broadway favorites, and opera. “It will be a great concert honoring America’s birthday performed by some of the area’s great musicians,” says Yassky. The July 1 concert will also include a reading of the Gettysburg Address by WQXR’s Elliott Forrest, accompanied by the Orangetown Concert Band.

Nyack’s July 4th Fireworks is co-sponsored by the Village of Nyack and Cablevision.

The Tuesday July 1 presentation of “An American Salute” is part of the Friends of The Nyacks Mostly Music Series. Additional support for these events is provided by the Education Association of South Orangetown and the Nyack Teachers Association.