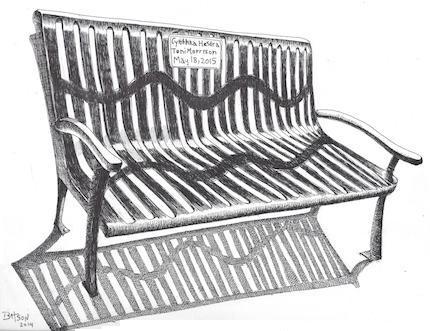 Nyack will soon host a monument to the painful period of history when African slavery was a global industry. Later today, November 18, 2014, at 1p, representatives of the Toni Morrison Society will be joined by Mayor Jen Laird-White, Nyack Public Schools Superintendent Dr. James Montesano and other local civic leaders in Memorial Park to announce the installation of a commemorative bench to honor Underground Railroad conductor Cynthia Hesdra. Toni Morrison, the Nobel Prize winning author and Grand View-on-Hudson resident, will be invited as a special guest at the dedication ceremony on May 18, 2015. 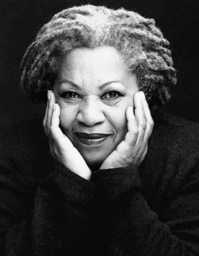 The project to reinterpret the ordinary park bench as a place to ponder public history began with a turn of phrase. In response to an interviewer’s question in 1989 about the inspiration of her novel Beloved, Morrison said:

“There is no place you or I can go, to think about or not think about, to summon the presences of, or recollect the absences of slaves . . . There is no suitable memorial, or plaque, or wreath, or wall, or park, or skyscraper lobby. There’s no 300-foot tower, there’s no small bench by the road. There is not even a tree scored, an initial that I can visit or you can visit in Charleston or Savannah or New York or Providence or better still on the banks of the Mississippi. And because such a place doesn’t exist . . . the book had to” (The World, 1989).

The compelling comment became a call to action for the Toni Morrison Society. In 2006, the Bench by the Road Project was established and the metaphor was made real. Nyack will be the 14th bench location around the globe.

Sullivan’s Island, South Carolina, site of Fort Moultrie, the embarkation point of nearly 75% of the slaves who entered America in the 18th and 19th centuries. 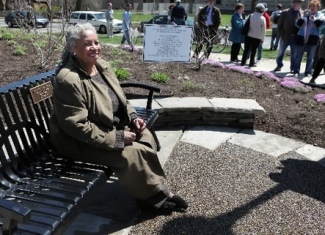 Oberlin, Ohio, a community active in the clandestine resistance to slavery called the Underground Railroad.

Fort-de-France, Martinique, in honor of the 100th anniversary of the birth of Aimé Césaire. 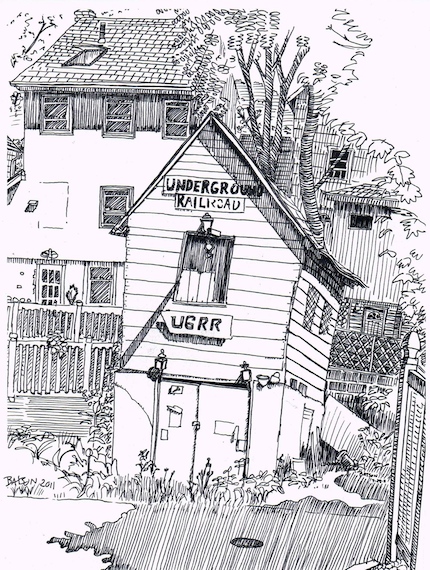 The process that led to Nyack’s selection was set into motion when a shrine to the Underground Railroad near Main Street was condemned in late 2013. A meeting of leaders of the African American Community was held at the home of Village of Nyack Mayor Jen Laird-White in December of 2013 to discuss the impending demolition. The group expressed their concern that an important chapter of the African American experience in Nyack was being erased from the local landscape if the commemorative structure created by Joseph Mitlof was lost.

Mitlof, who passed away in April 2014, had established several historic markers, in addition to the shrine, that traced the path and celebrated the conductors of the Underground Railroad in Nyack. The Underground Railroad is a euphemism to describe a series of clandestine sanctuaries, located in private homes and other structures throughout the United States. The escape route allowed slaves to flee their captors in slave-holding states in the years before the Emancipation Proclamation was signed by in 1863 by Abraham Lincoln. Contemporaneous accounts and current scholarship cite Nyack as an important Underground Railroad location.

Even though Mitlof never claimed that his shrine was an actual Underground Railroad location, the absence of the building, with its signage visible from Main Street, created a void. Furthermore, the demolition of the shrine was a painful reminder of the 1960s urban renewal project in Nyack that destroyed dozens of homes and displaced a vibrant African American community that lived in the area between Main Street, Depew Avenue, Broadway and Franklin Street. 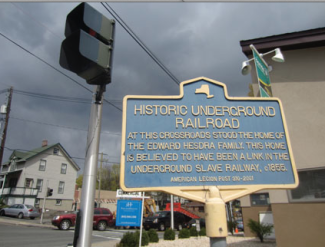 The remaining markers that Mitlof had erected remain, but were not considered an adequate alternative. Located respectively in an isolated parking lot and on sidewalks near heavily trafficked roads, the markers were uninviting.

The group resolved to harness the urgency that the loss of the Underground Railroad shrine represented and create a permanent monument. The Nyack Commemoration Committee was created by a resolution adopted at the April 10, 2014 meeting of the Village of Nyack Board of Trustees. I was later asked to serve as Chair. 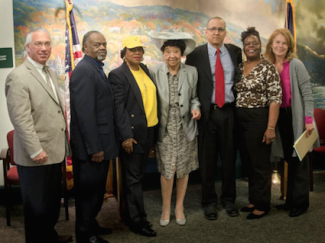 The Bench by the Road Committee of the Toni Morrison Society approved the application submitted by the Nyack Commemoration Committee. The committee is composed of: 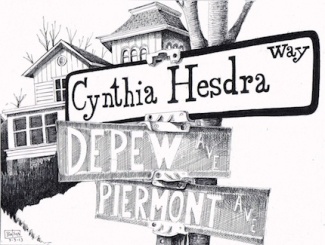 The Bench by the Road in Nyack will commemorate a former slave, who became an entrepreneur and abolitionist, Cynthia Hesdra. Hesdra (1808-1879) was enslaved at one point during her life, yet died a wealthy woman, accumulating properties and businesses in New York City and Nyack. One parcel was near what is now Memorial Park, at the point where the Nyack Brook meets the Hudson River, a landmark used by escaping slaves seeking safe passage to Canada. Hesdra is listed in Mary Ellen’s Snodgrass’ Underground Railroad Encyclopedia as a conductor. 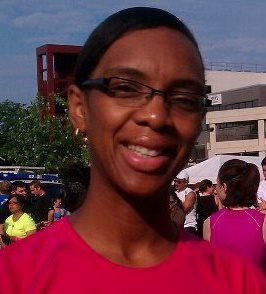 Louisiana State University Associate Professor Lori Burns Martin, who was raised in South Nyack, was responsible for having a section of Piermont Avenue renamed Cynthia Hesdra Way in 2010. She also authored the only scholarly account of Hesdra’s life, The Battle Over the Ex-Slave’s Fortune: The Story of Cynthia Hesdra. Afro-Americans in New York Life and History and the book, The Ex-Slave’s Fortune.

The proposal calls for: 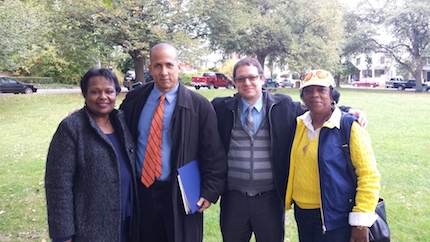 Toni Morrison Society founder Dr. Carolyn Denard, who serves as Dean of Connecticut College and her colleague Delaware Valley College, Assistant Professor of History and Policy Studies, Dr. Craig Stutman came to Nyack on October 20. Their first order of business was to attend a meeting with Nyack Public School’s superintendent, Dr. James Montesano and his key administrators. The Nyack Commemoration Committee selected a school day for the dedication ceremony so that public school students could play a central role in the installation of the bench. The meeting produced a collaboration that will introduce students in Nyack to the life and work of Hesdra and Morrison and the history of the Underground Railroad. The bench will also become a landmark that this current cohort of students can return to for the rest of their lives and proudly proclaim that they helped erect. 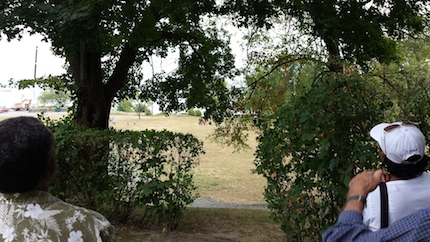 In his recently published book, The Half Has Never Been Told: Slavery and the Making of American Capitalism, author, historian and Cornell University associate professor Edward E. Baptist Cornell notes that America has not adequately remembered those enslaved in our country from 1620 until 1863. He observes that while monuments to Confederate and Union soldiers are scattered across the South and in places in the North, like Brooklyn’s Grand Army Plaza, there is scant statuary recognition of the men, women and children who suffered through involuntary servitude, or those that sought to liberate them. In his book, published in 2014, Baptist makes the same argument that Morrison made in 1989 and that the Toni Morrison Society has sought to redress.

In Nyack and 13 other communities around the world, the Bench is more than simply a perch from which to feed pigeons, or a place to make a bucolic retreat. Our bench by Cynthia Hesdra Way will be, as Morrison said, “a place to think about or not think about, to summon the presences of, or recollect the absences of slaves,” and to honor the woman who risked her hard-won liberty and prosperity to shepherd others to freedom.

During the Civil Rights Movement, normally innocuous public accommodations, like water fountains and bus seats, were transformed by courageous action into powerful symbols of resistance to racial oppression in America. The Toni Morrison Society’s Bench by the Road Project similarly modifies the meaning of the mundane park bench.

Special thanks to Enid Mastrianni

Bill Batson is an activist, artist and writer who lives and sketches in Nyack, NY. “Nyack Sketch Log: Toni Morrison’s Bench by the Road” © 2014 Bill Batson.

“Toni Morrison’s Bench by the Road,” written by Nyack Sketch Log columnist Bill Batson, was first published on NyackNewsAndViews.com on 11/18/2014. 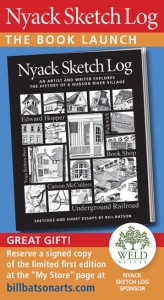